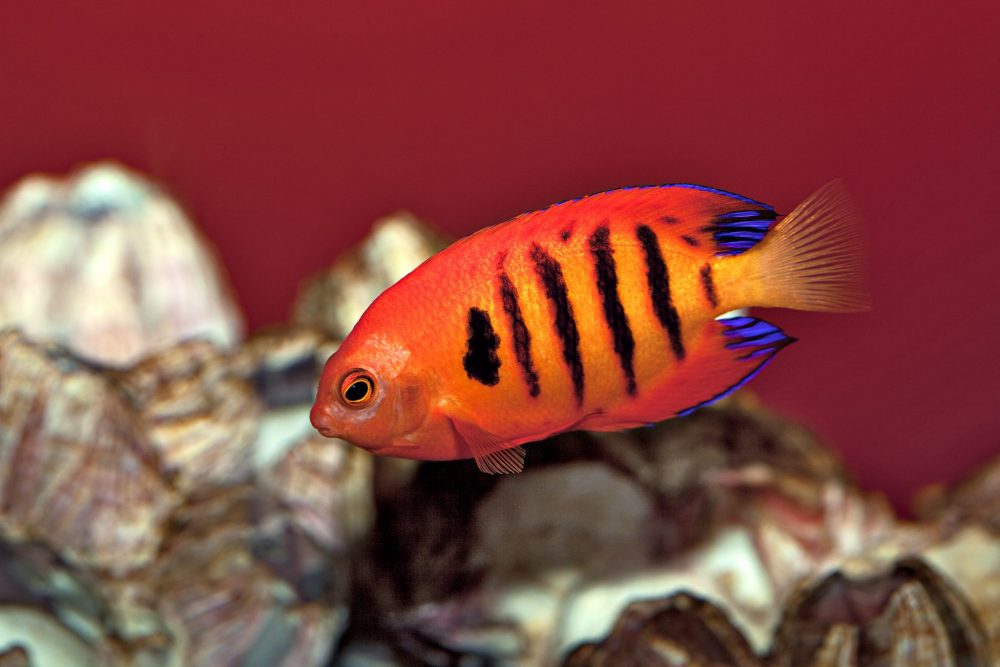 A stunning addition to any home aquarium with its outstanding colour. Immediately grabs the eye and is a truly beautiful angelfish.

Has long been considered a durable aquarium choice and is justifiably a popular species because of this.

Feeding 2-3 times a day with a varied diet, containing Marnine algae and Spirulina. Feeds well on mysis shrimp and other high-quality meaty foods. Ideally this fish would be housed in an aquarium with Live Rock to allow constant grazing.

Commonly kept in reef aquariums despite its tendency to peck on corals. Should not harm ornamental shrimp. Can be quite aggressive towards members of its own genus, similarly sized or shaped fish. Will attack tangs and surgeon fishes when first introduced into the aquarium. This behaviour should subside quickly, but occasional altercations can occur. To fit into a relatively peaceful community aquarium, it should be the last fish introduced.

There are no reviews yet.

Be the first to review “Dwarf Flame Angelfish” Cancel reply

To Return Your Order:

We will contact you within 2 working days with our feedback and advise you further on returning your item. No refunds will be processed until they are received and fully inspected by one of our advisers. Where possible you can provide these details in person and return your items to our Glasgow store.

Please also revise our Policy’s below before getting in touch.

In all situations your item must be returned to us at your own expense. Your products are your responsibility until they are received for inspection by us in our Glasgow store.

We cannot in any instance accept returns for any damaged in transit goods if you have inspected and accepted delivery of the item. If the item is damaged upon arrival please do not accept delivery and contact us immediately. If you wish to return your item for other reasons we allow 7 working days to return any faulty or unwanted goods. Where possible we will endeavor to send out replacement parts and work towards a solution in replacing or refunding your item.

In any instance we cannot accept return of any livestock purchase. We ask that you take the proper precautions before placing any order of livestock by fully researching the fish, coral or invertebrate. We cannot accept of the item once your order has been placed and/or received and reserve the right to deny refund. Special instances in which you have mistakenly ordered an unsuitable item and the item has not been processed for dispatch and still in our Glasgow store we can endeavor to cancel your order for you. We will always try our best to do what we can for our customers and we always ask that you try and get in touch with a customer adviser for any advice or help.

In any event we reserve the right to deduct postage and restocking fees.